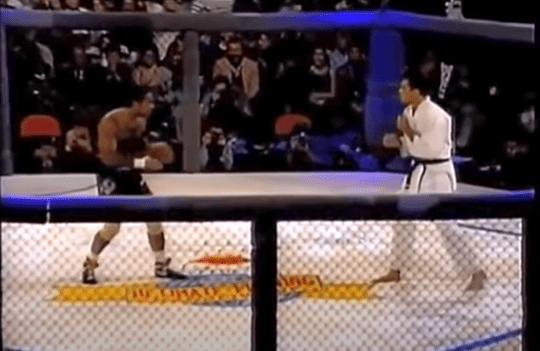 Boxing is a unique martial art. Over the years the primitive sport has been refined from a crude stage to a fine one. In ancient times, boxing was merely used as a weapon between combatant people. Now it is a combat sport in which two people wearing protective padded gloves, hand wraps and mouthguards throw punches at each other for a fixed period abiding by other rules in a boxing ring. Today we shall try to figure out some answers regarding the result of the supposed fighting between a boxer and a martial artist. If they fought, who would win?

A boxer is an unconventional modern martial artist. At the same time, there are more than fifty martial arts all over the world.

We have chosen some of the popular martial arts to conclude a credible decision between a boxer and a martial artist:

Let’s deal with Karate and boxing. Who would win if they fought with their skills, equal experience, and equal strength? Karate is a serious kind of martial art developed in the Ryukyu Kingdom ruled as a tributary state of imperial China. It evolved from the indigenous Ryukyuan martial arts under the influence of  Chinese martial arts and was developed by White Crane Style, a Southern Chinese martial art that originated in Yongchun County, Fujian province. According to oral tradition, the style was advanced by a female martial artist named FangQiang. Historically Japan officially recognized Karate as a martial art only 86 years ago. And it debuted in Olympic sports in 2021.

As we said Karate is a lethal martial art if unleashed. A professional Russian competitor named Said Isayev, aged 20, died four days after a kick to the head. The kick caused a brain hemorrhage doctors on duty confirmed on July 12, 1998. But of course, present-day karate is more enjoyable because the bad intention of killing the opponent almost disappeared. Now it is a popular martial art sport contested almost everywhere in the world.

Boxing is a deadly sport too. Every year at least one death occurs in the boxing ring. It is believed that nearly 2,000 boxers have unnaturally died as a direct result of injuries in bouts since 1884. That is the year when Queensbury Rules introduced the mandatory use of padded gloves.

However, in a fighting match between a boxer and a Karateka, the winning decision would certainly be a crucial one. Because it is a fight between two competent people. Their win heavily depends on the situations they can avail in the ring. Fighting conditioning is also a factor to win a match.

If the boxer can not defend against a series of kicks, and cannot distance himself from the karateka’s kicking range then the Karateka will win. Also, outside the ring in the street fight, where no rules are required, the Karateka has more chances to win because a kick is more powerful than a punch. Most modern karate is point fighting. So nowadays fighters follow sanctioned rules and disciplines.

If the Karateka fails to maintain distance, and the boxer gets him within his perimeter the boxer will win. Because the boxer can make a rough and tough punch to the opponent. In many instances, there occurred a pass-out situation in the boxing ring.  Sometimes the boxer’s single heavy punch could end the game by knocking out the Karateka.

Mixed Martial Arts MMA is believed to have dated back to the ancient Olympic Games in 648 BC. The brutal contest combines wrestling, boxing, and street fighting.

Most of the practices in MMA carry a high risk of concussion, brain damage, suffocation, artery ruptures, spine damage, and other irreparable injuries, mostly in the head and the neck.

There have been at least seven deaths recorded as of April 2019. The deaths were violent resulting from sanctioned Mixed Martial Arts contests and nine more deaths related to MMA fights succumbed to injuries.

Mixed Martial Arts is also a popular combat sport, though not as much as boxing. Nevertheless, MMA is bloodier, boxing has more records of deaths in the ring so far. In a fight with no rules, MMA looks like a wild and self-inflicting game. Still, there are huge fans who like extreme sports like MMA.

An MMA fighter faces stigma from the medical community because they won’t budge from their stance of ruthless MMA fighting. MMA fighters often engage in violent combat and end up in bloody situations the medical community is unwilling to deal with. In MMA, most fighters understand the risks of broken bones-arms, feet, ankles, collar bone, and other joints of the body. They surely face the threat before they enter the formidable cage. Maybe it is an incorrigible fighting passion they can not avoid.

Again, we suppose a fight between a Boxer and an MMA fighter to determine who will win.  If the fight is a boxing match under the strict rules of boxing the boxer will win. But in the case of an MMA fight, held in a cage with few rules to maintain the MMA fighter will overpower the boxer with a few more extra punches planted on him while already he is down. And with a “street fight,” an MMA fighter can easily beat a boxer for sure.

A boxer is a martial artist, and has mastered the art of doing damage with his hands. Boxing focuses on close-range power punching and technical combinations to generate more power. But facing Krav Maga boxing is a challenge.

Krav Maga is a hybrid martial art derived from a combination of techniques used in boxing, judo, karate, aikido, and wrestling. It is better known for its focus on real-world situations and its extreme efficiency in street fighting.

Kung fu has a long history of evolution. It is one of the deadliest martial arts that emerged and developed in China. In bare-hand combat, it will be extremely difficult for a kung fu guy to defeat a well-trained boxer. But if a kung fu master is allowed to use his expertise, all techniques including smashing groins, and gouging eyes he could kill a boxer in the ring.

There are other popular martial arts and they are equally strong as a boxer is. They too are too great to be defeated by a boxing guy because a boxer hardly knows the technique of martial arts. A martial artist generally knows the boxing techniques. In most cases, martial artists would most probably win if they fought.