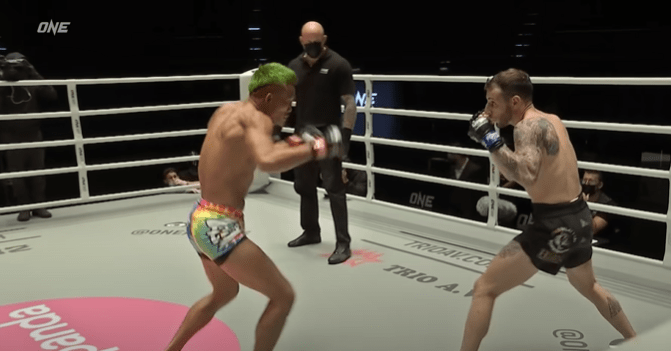 In terms of fighting, Muay Thai Martial Art is a greatly powerful striking art in the world. Because fighting does not necessarily mean killing each other, neither within the ring nor on the street. Muay Thai has been assessed in tournaments and real-life circumstances for hundreds of years among all the martial arts. Muay Thai fighting art both offensive and defensive has faced refining-test and become more and more powerful. In this post, we will discuss Muay Thai and if it is the most effective martial art in terms of fighting or not!!!

In Thailand, Muay Thai is the most celebrated martial art. The martial art incorporates eight limbs and they are Punches, Elbows, Knees, and Kicks. According to history, the first Thai Army was born out of a need to defend  Suk Neighboring Around the 13th canned-18thm the aggression of the neighboring Ayutthaya. In the mid 1 the 8th century, the Thai Siam dynasty faced another invasion, the Burmese Konbaung dynasty. Thai combatant soldiers were properly trained up with this brutal form of the notorious full-contact Art of Eight Limbs. At that time, Muay Thai martial art was just a killing weapon. The sole purpose was to exterminate the attackers to defend the kingdom.

This is the most asked question about why Muay Thai favors powerful martial arts. To substantiate the verdict in favor of it has a few solid reasons can be provided below:

The arts have some flexibility. It could work as a deadly weapon and it could be just sportive, depending on the situation. Muay Thai martial arts have a wide range of choices. It uses Punches, Kicks, Knees, and Elbows to attack the opponents and utilize oneself from practice.

A Muay Thai learner can utilize his 8 limbs too, and practice the fighting arts. Through regular strenuous practice, a practitioner can discover the gifted strength of his limbs that can be used to overcome this martial art in Thailand. It has become a workout for body aptitude and nice practice for Men, women, and children over six years old. It also can practice Muay Thai Self-defense under a skilled or professional trained self-defense defense and body fitness as well. In terms of self long-lasting, no intention to hurt others to the extent of long-lasting injury Muay Thai is the best. It can be ascertained that this form of martial art is the most powerful for offensive as well as defensive purposes.

Muay Thai is formulated with particular lessons to facilitate the health benefit of the practitioner and to keep his body and mind fit for the competition. Outside the fighting competition within the ring people, in general, need to have a healthy mind and strong body to work for making a living. That is why both aerobic and anaerobic exercises are integrated into Muay Thai learning trials.

Muay Thai is most effective for burning calories. Gym practice, as recorded, helps burn 1000 calories an hour. It is an efficient way to burn unnecessary fat and lose weight to gain the strength essentially required for a Muay Thai fighter.

Minds and bodies but spirits Muay Thai art toughen practitioners’ minds, bodies, and spirits. The martial art accumulates confidence through ordinary practice. It promotes the discipline of the mind, controlling weak emotions and feelings for the sake of professionalism.

Although Mixed Martial Arts is a fast-growing sport in the world, Muay  Thai is the foundation of this most popular martial art. Since Muay Thai has the option to use 8 limbs the fighter has more advantages that an MMA fighter has.

The question is whether Muay Thai is the most powerful martial art. The answer is yes. Compared to Krav Maga, the art of killing, Muay Thai in practice is less powerful, because the latter maintains rules of martial arts. Krav Maga was purely invented and developed to kill attackers and enemies ruthlessly as quickly as possible without a second thought. Krso-called so has had a history to have become a part of o called martial art.

The history of Krav Maga begins, as a hate crime, on the streets of 1930s Bratislava, Slovakia. As a Protest Protagonist Hungarian-Israeli Imi Lichtenfeld used his violent boxing and writing skills to fight against antisemitic gangs before the World War 2 brews. Using this technique he helped Jews from the Nazi oppression and killed them on the street.

Krav Maga is still being taught as a primary hand-to-hand combat technique at some police departments in the United States to nab a criminal. The FBI is also taught to utilize force to grab a guilty person on the street or so. However, Krav Maga is not a spouse-gouging martial art. The pleasure of watching the eye-gouging scene would be a perversity. It is a sheer weapon instead of a metallic one to brutally overpower them in terms of fighting. With universal laws and acknowledgment, Thai has become a prominent and the largely powerful Martial Art in the world.

This post is all about Muay Thai martial arts. We hope people will get enough information about Muay Thai. If anyone needs any more data about it, please let us know.